I Will Not Forget Thy Word

11Thy word have I hid in mine heart, that I might not sin against Thee. 12Blessed art Thou, O Lord: teach me Thy statutes. 13With my lips have I declared all the judgements of Thy mouth. 14I have rejoiced in the way of Thy testimonies, as much as in all riches. 15I will meditate in Thy precepts, and have respect unto Thy ways. 16I will delight myself in Thy statutes: I will not forget Thy word. Emphasis mine
Psalm 119:11-16

"Visit many good books, but live in the Bible"
C.H. Spurgeon

Posted by Kimberly at 6:43 AM No comments:

Tomorrow. 2017.  Geesh, that didn't take long!  2016 was swift. It flew by faster than any year in my memory. That's not necessarily a bad thing because, in addition to it's speediness, 2016 was often unkind. Frankly, there were moments when it was downright mean, nasty even.

It found those I love the most in the midst of confusion, uncertainty, heartbreak, divorce, financial angst, emotional distress, diagnoses with uncertain prognoses, fear for our nation, concern for our community, changes in careers, the workplace and friendships.

Family and friends lost loved ones, some sadly anticipated but others left suddenly. Gut-wrenching, unexpected. Some I've held and cried with while still others, in far away places, I've wept and prayed for from afar.

Looking back sends my mind reeling. You name it, 2016 touched it. It's Winter too harsh, Spring too short, Summer too wet and then, suddenly too dry. Autum too ... did we even have one? So, while I can't imagine I'll look back on it with much fondness or, for that matter, miss it at all, to be fair, it was not without it's blessings ...

Remember, tomorrow we're off to a new start. I think the fact that it's on a Sunday is a good thing. We'll be starting off a whole new year at the beginning of a whole new week. Perhaps it's a sign. A sign of good things to come.  Happy New Year! 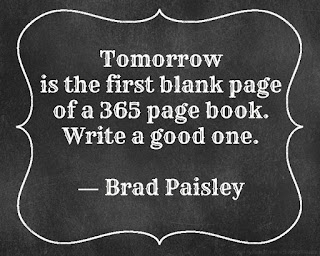 Hello.
Long time no see.
How have you been?
Me? I'm fine, thank you.

Oh, I almost forgot ...
Happy New Year!
Can you believe it's 2016?  Me either.
As usual, the end of something and the beginning of another prompts a gal to thought. I've thought about it and prayed about it for a while now and have decided that 2016 needs something to define it, to plan on, look forward to, strive towards.  A theme of sorts.
With that said, my intention is to be intentional this year.
In·ten·tion·al
inˈten(t)SH(ə)n(ə)l/
adjective: intentional
done on purpose; deliberate.


In every. single. thing...
in my marriage.
in my home.
in my church.
with my family.
with my health.
in my community.
in my job.
in my friendships.
(and perhaps even)  in my blogging.
(Although the jury is still out on this one. Only time will tell but you'll be the first to know!)

Today is November 1st.  Are you thinking what I'm thinking? "Where has this year gone?"

It was one of change in our home and thankfully, unlike it's predecessors (aka 2011, 2012 & 2013) those changes were overwhelmingly positive and have left me full of hope.

November 1st is kinda the unofficial start of the holiday season, don't ya think?

In a few weeks we'll be in the throes of it all. The 4th Thursday will find us (hopefully) surrounded by family & friends, stuffed to the gills, going through the sales paper to plan our Black Friday attack and from that point, it's on but for now ...

We have time to think about the past ten months. What they held. What changed. What we wished had changed.

I have no idea what season of life you're in.  You may be exactly where you want to be or very close to it. The thought of that makes me happy for you --- whoever you may be.

But wherever this post finds you, I challenge you to take the time to look around and count your blessings. Some will be obvious to you. Others you may have to seek out.

I suppose it's unfair of me to assume your 2014 whizzed by as quickly as mine did but whatever it's speed, I pray it treated you & those you love with kindness. 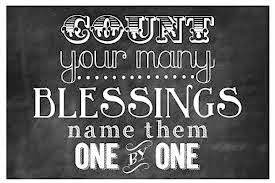 unforgettable: adjective,  earning a permanent place in the memory; impossible to forget; indelibly impressed on the memory ...

I'd say that pretty much sums you up, January Twenty-Fourteen. You with your brutal temps. Your ice & snow freezing mountainous rural roads, making travel treacherous and nerve-racking. 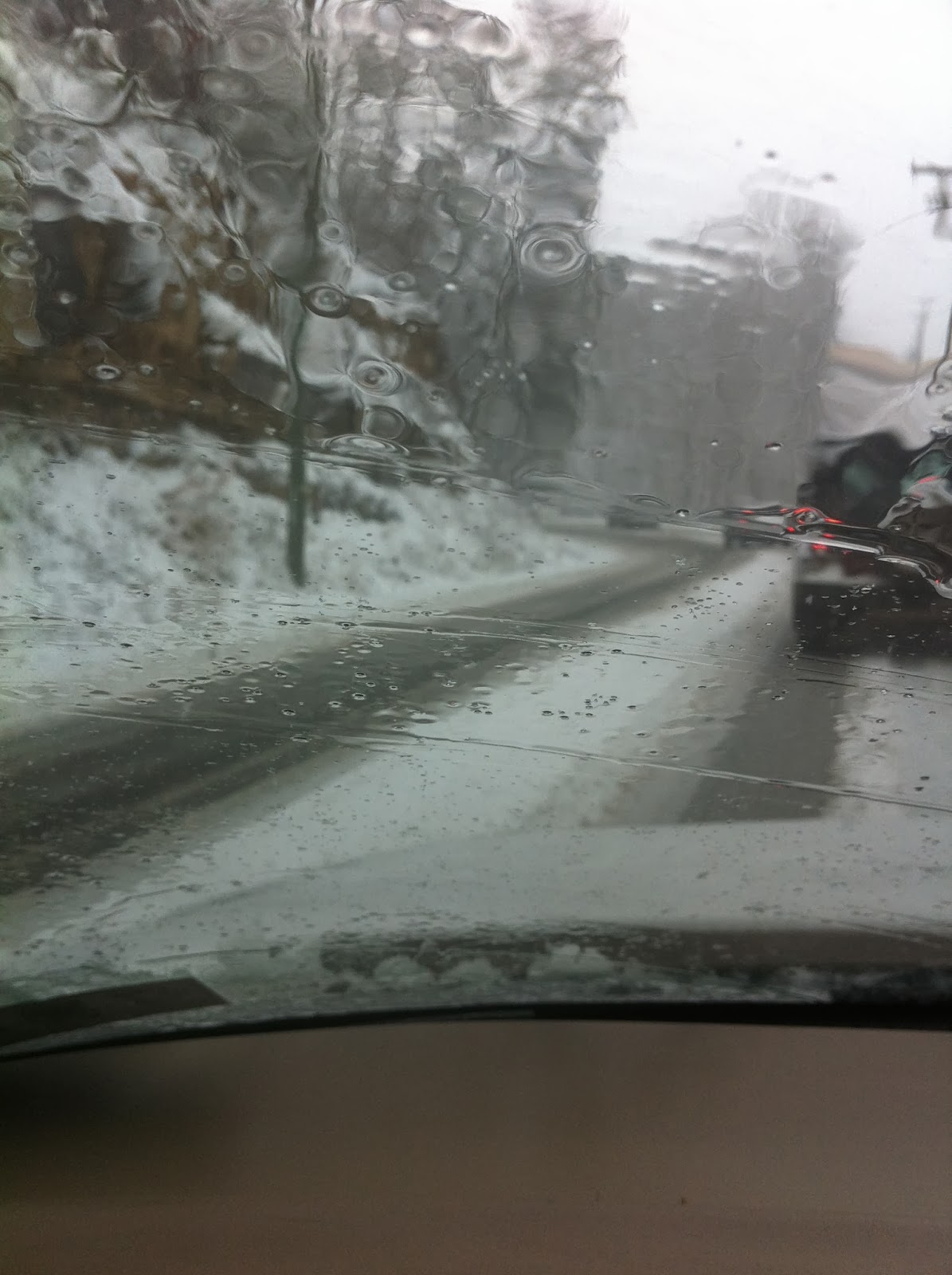 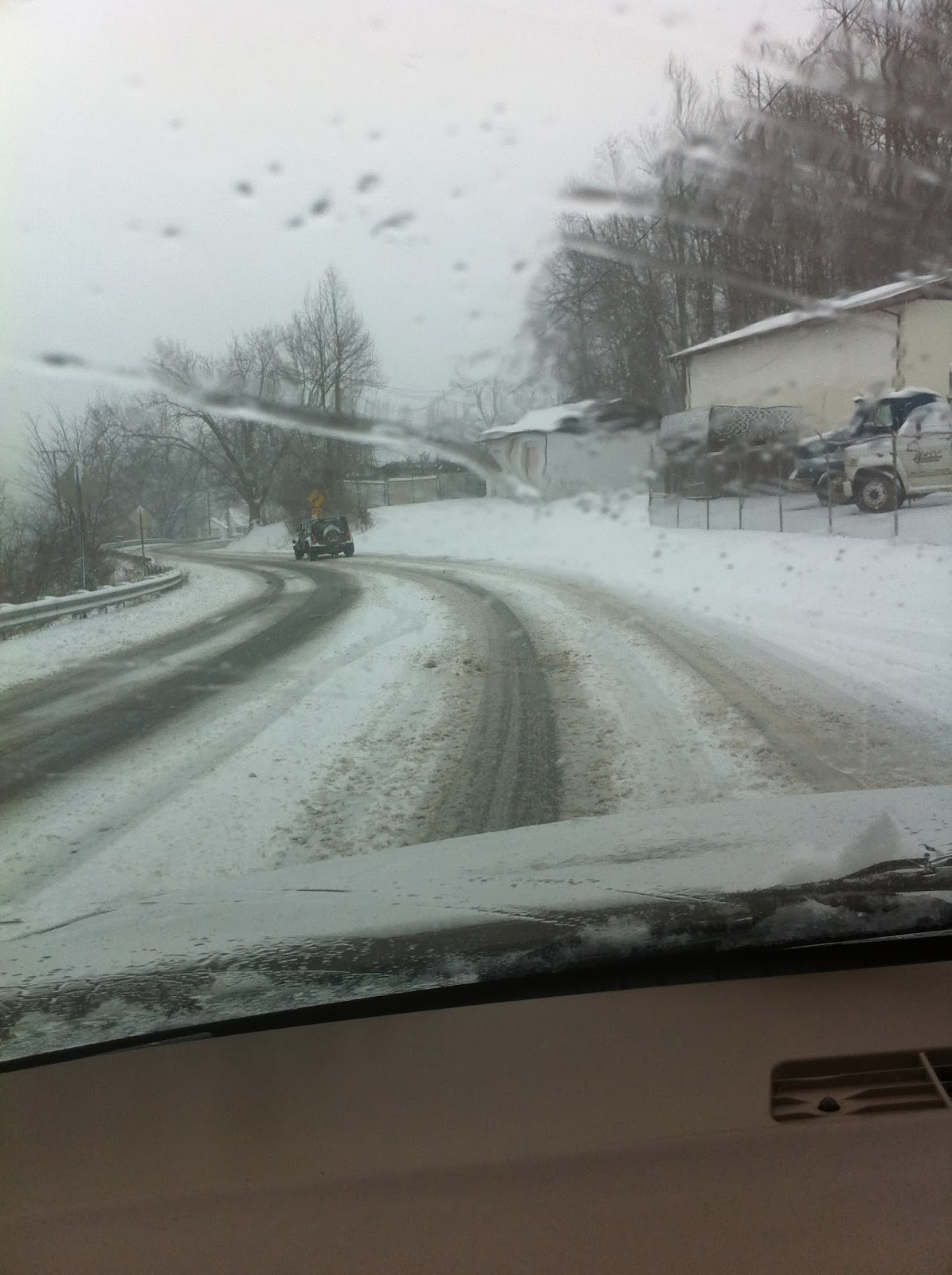 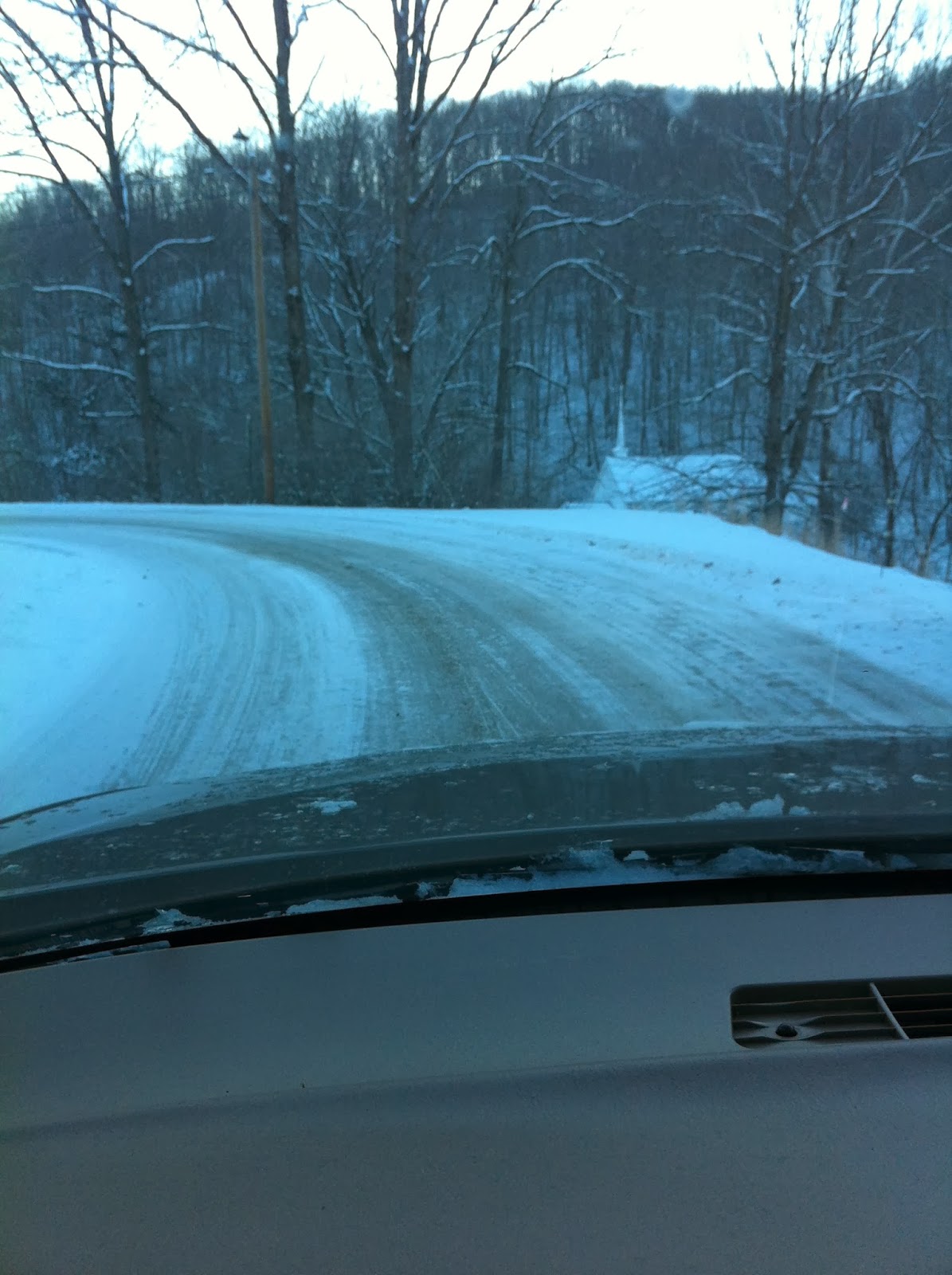 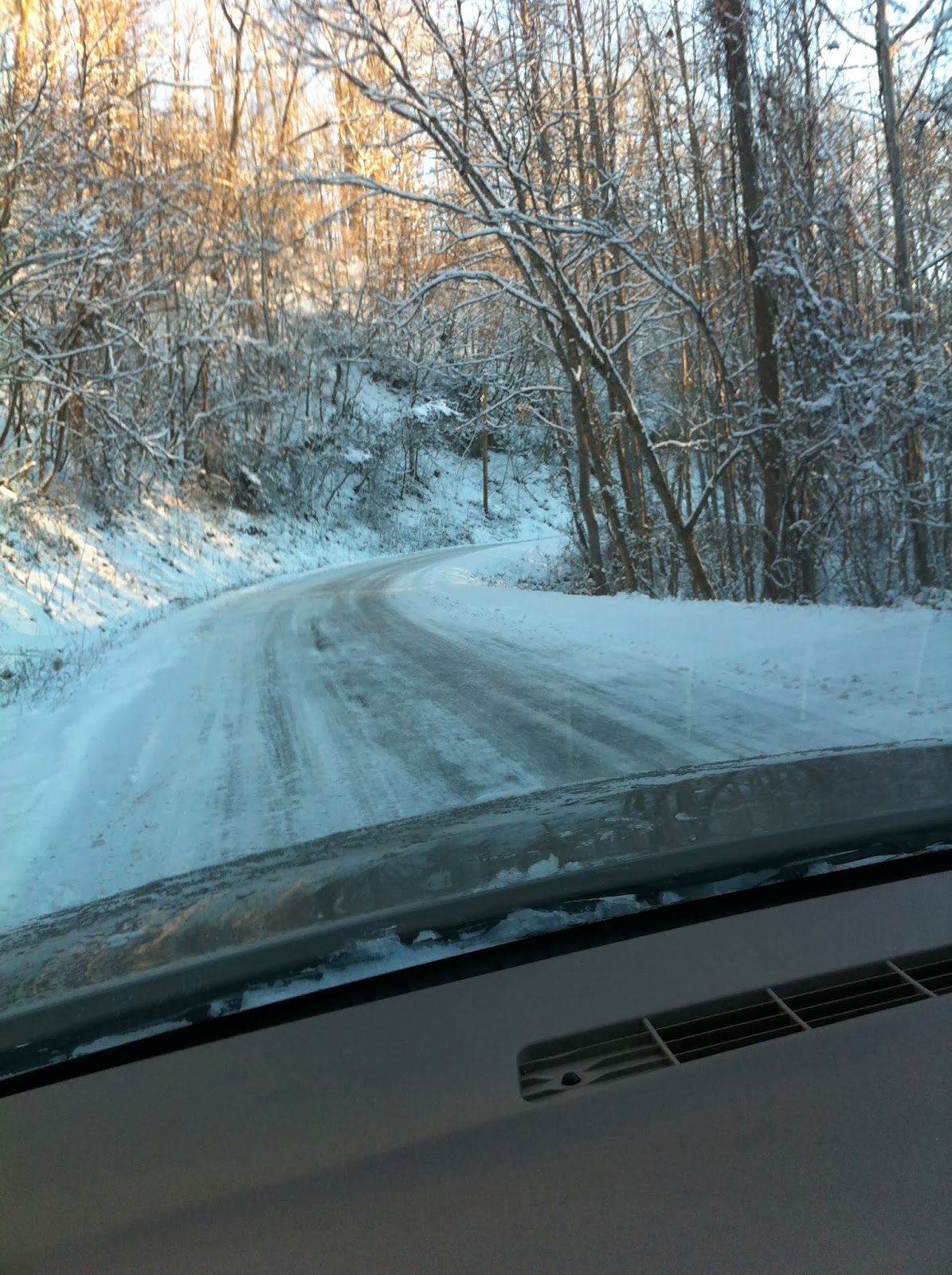 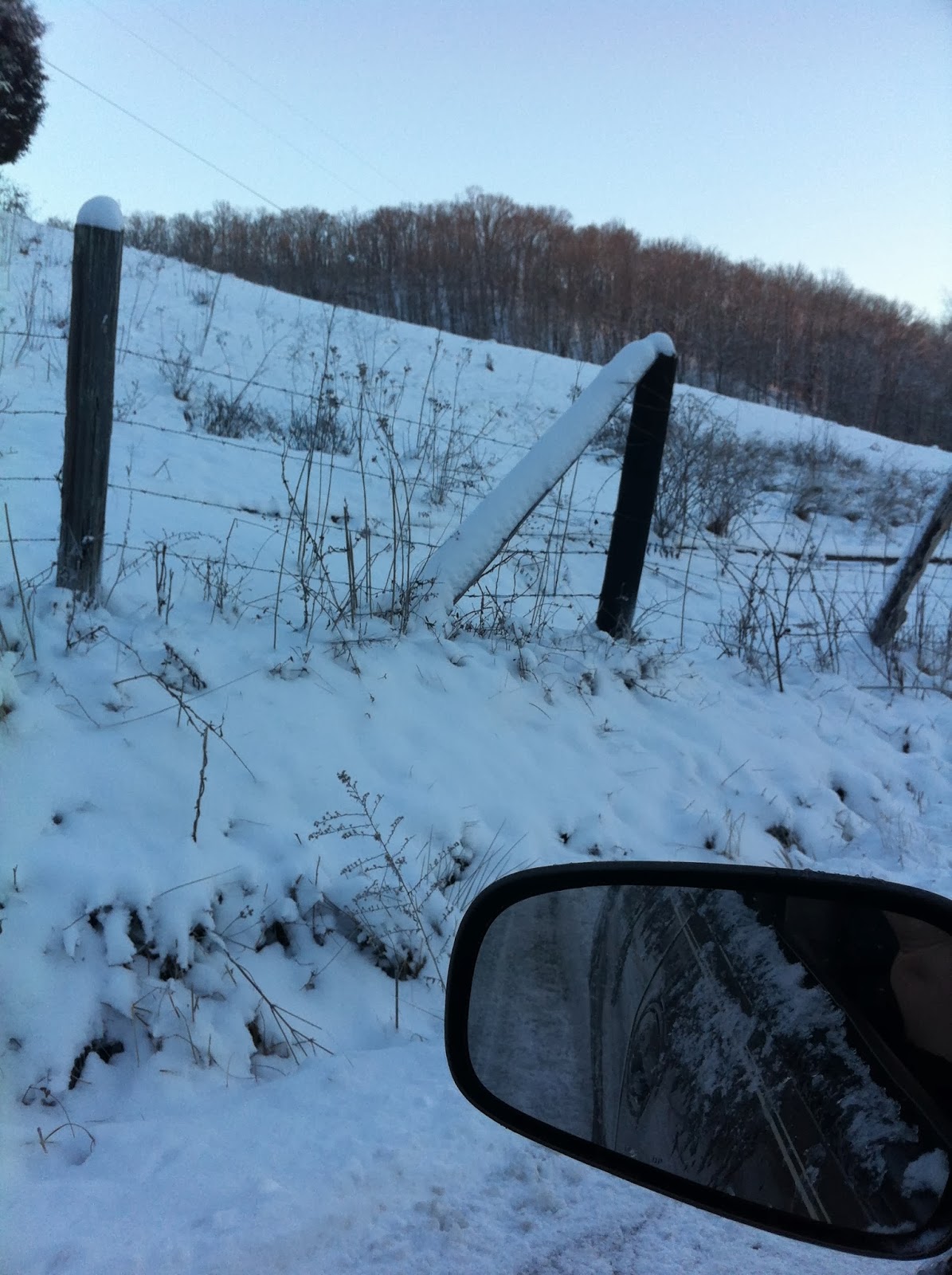 Thankfully, there was good in you.
My Sailor and his family were home for 11 days after a two-year absence. This made my heart very, very happy. 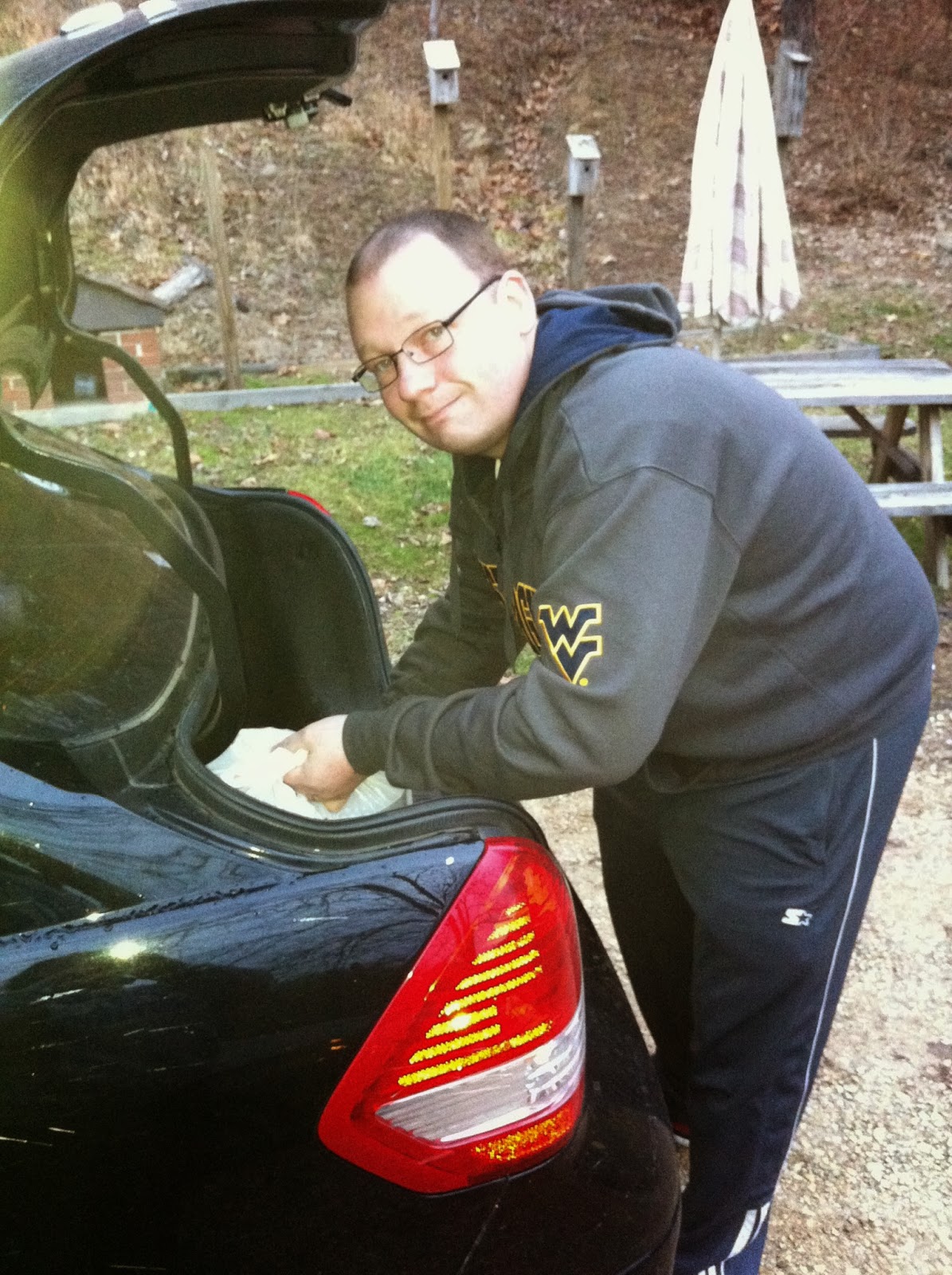 
﻿Our family welcomed a new little one. My niece, Lauren Brooke was born ...
And the next day, we celebrated my cousin Greg's 50th birthday. 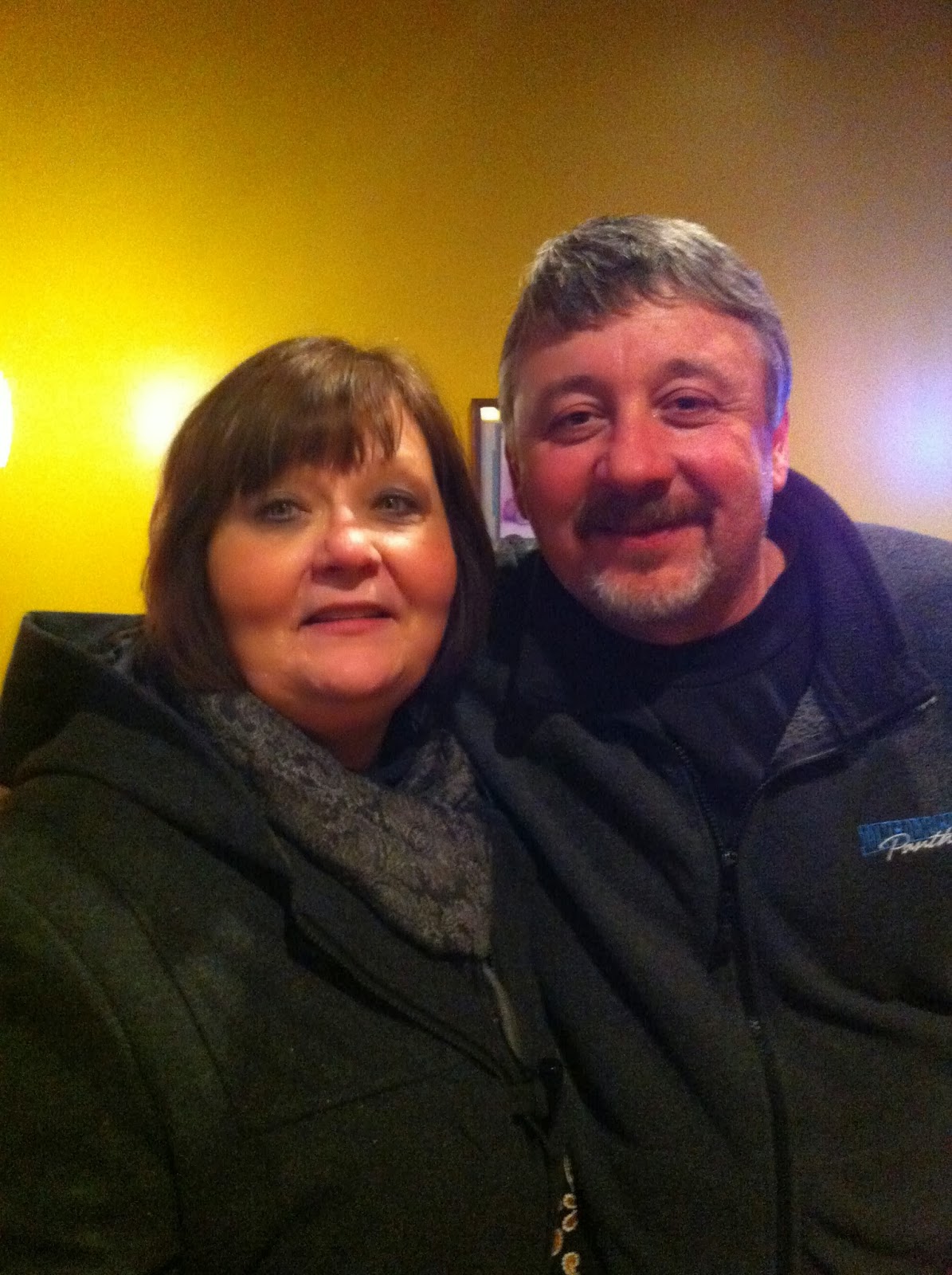 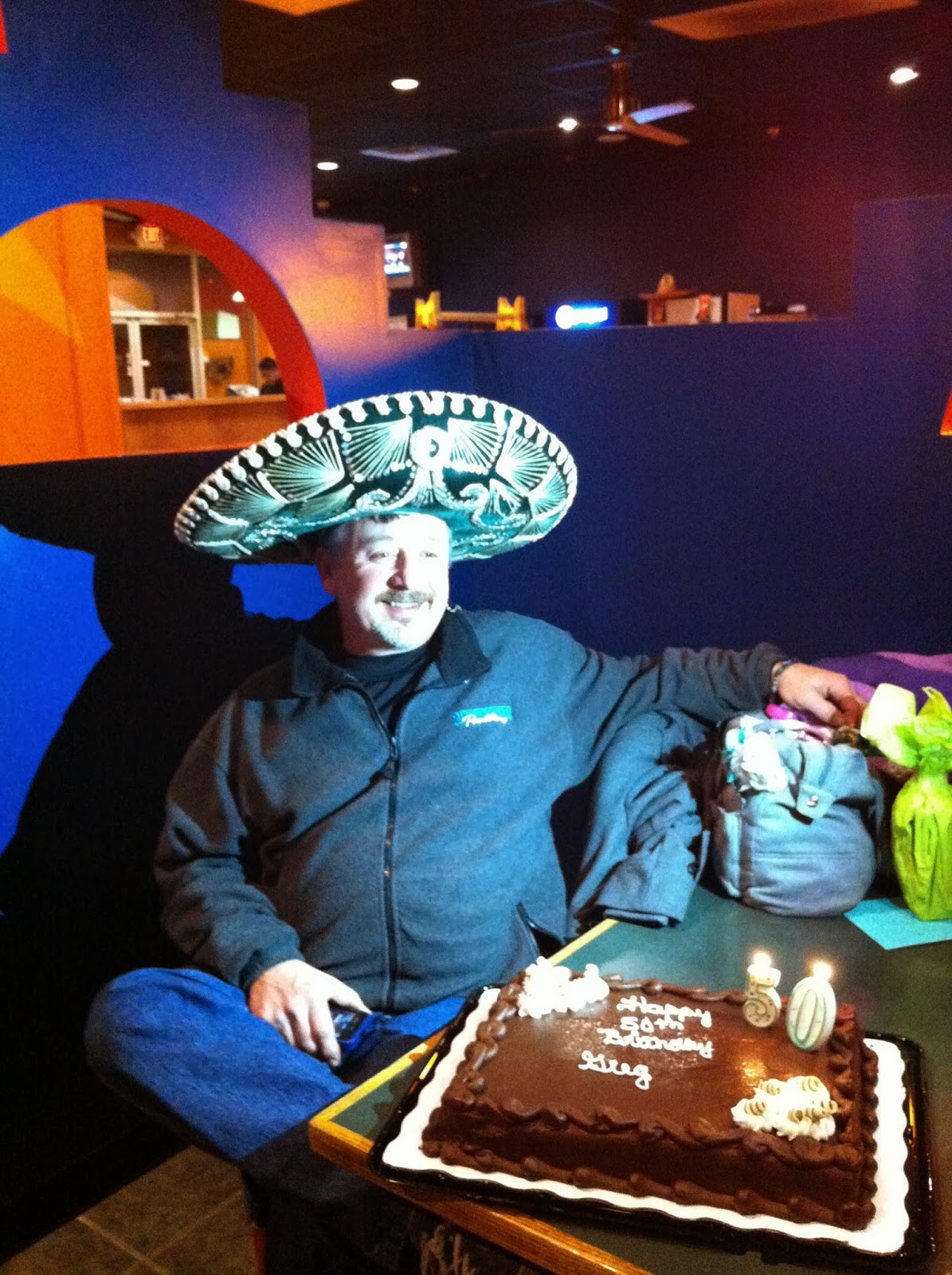 Even a non-snow lover, such as myself can appreciate that you had your moments of beauty. 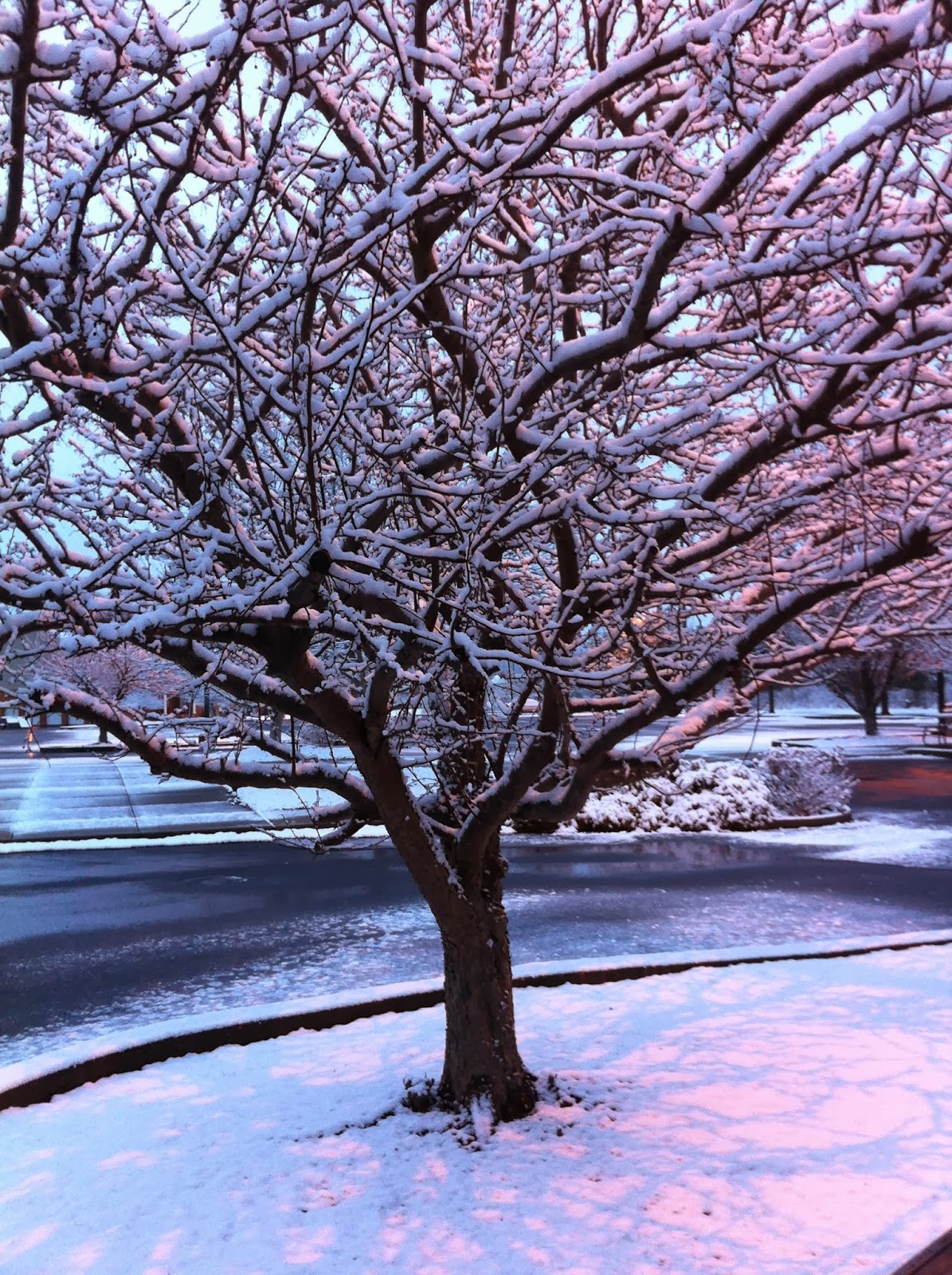 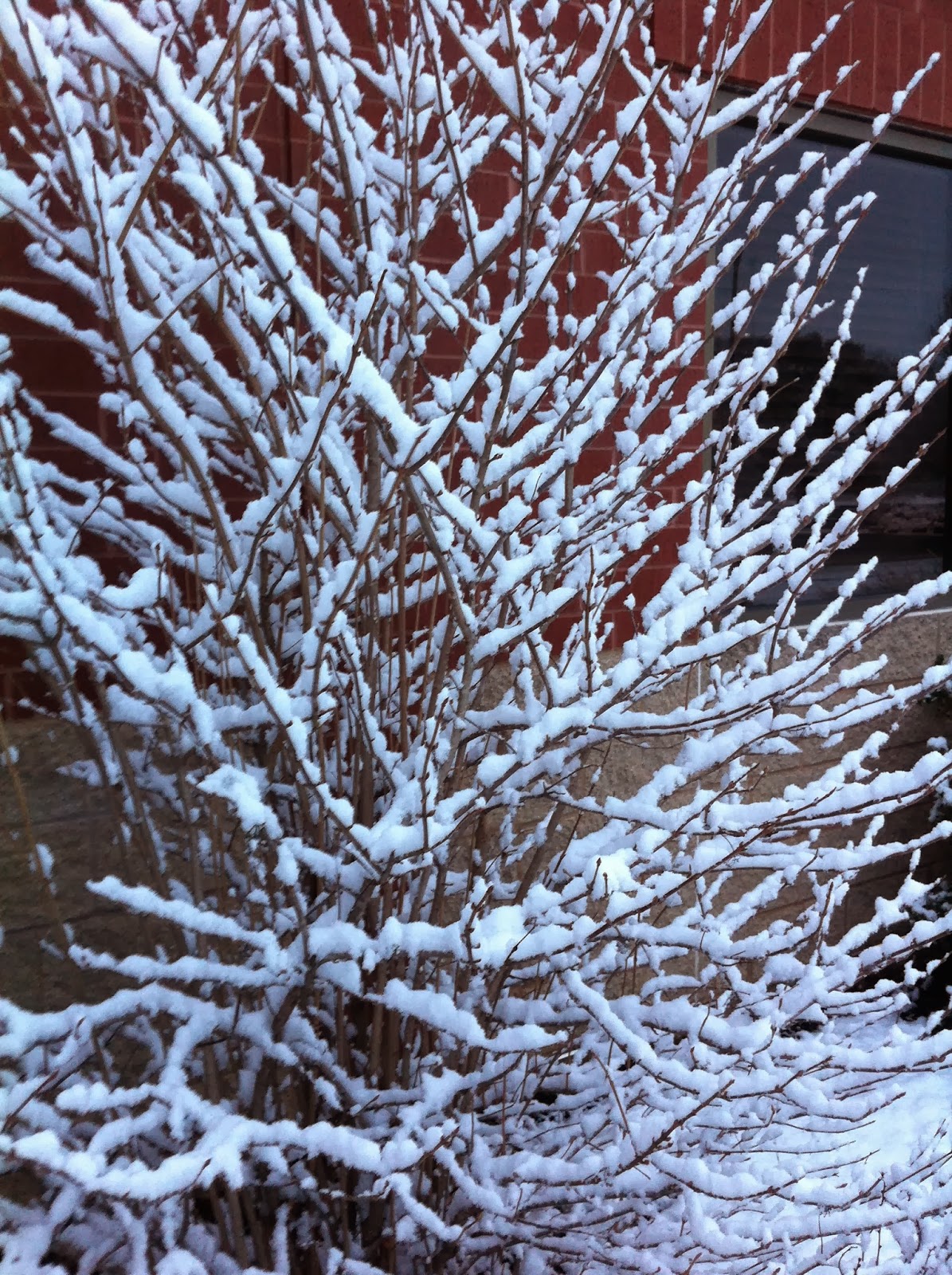 I think Nat King Cole summed it up perfectly ...  "unforgettable in every way and forever more, that's how you'll stay" ...  You've made your mark and you'll not be soon forgotten.

Go on now. It's time for you to leave. It's February's time to shine. With that thought, I'll close with a prayer ... 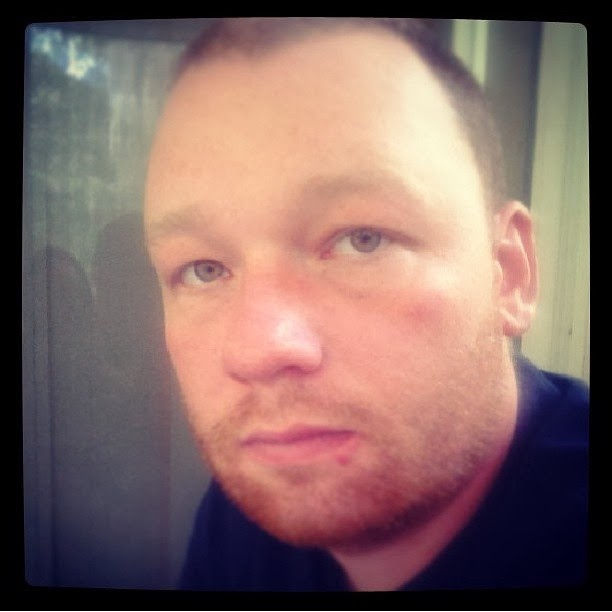 My oldest son & his family left today.
I've had a good cry.
My heart is heavy.
Residual damage.

Which goes to prove what I've long suspected to be true.
Proof that it never gets easier.

He'll be 34 in 13 days and yet, as I watch him drive away, my heart doesn't seem to be able to differentiate between the screaming infant placed on my sterile-draped abdomen early that January morn and the handsome, broad-shouldered sailor who has traveled the world. 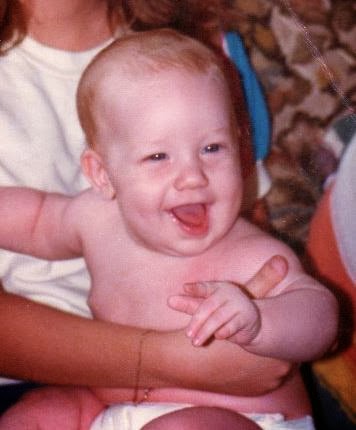 Is there a difference?
None that I can tell.
Don't get me wrong.
My head gets it.
My heart does not.
Which is regrettable on days such as this.

It had been two years since he'd been home.
That's a long, long time.
Especially in mom years.

In case you didn't know,
Mom years are even longer than dog years.
Of course, I just made that up.
But I challenge you to find a military momma who disagrees.

Before he left there was mention of another visit this year.
This Summer perhaps.
As wonderful as that would be, history has taught me to err on the side of caution.

So for now, I'll cherish the memories of the past eleven days.
I am truly grateful for the time spent together.
I have enjoyed every moment. 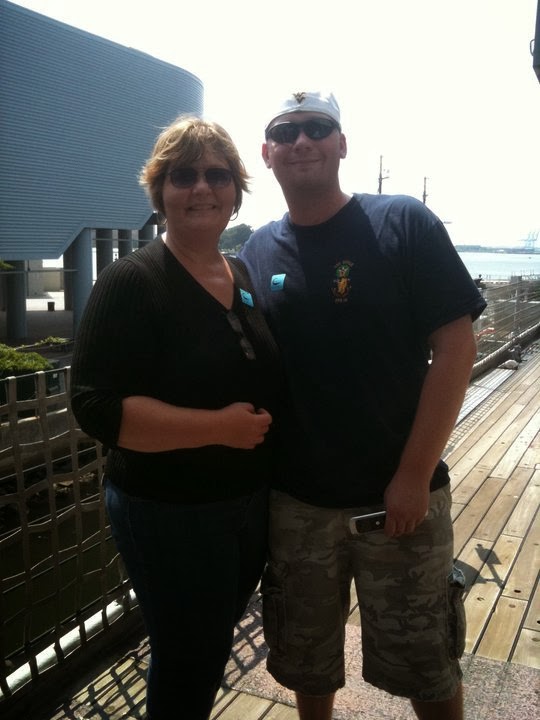 Today is the first full day of Winter --- all evidence to the contrary. Well, at least there's no evidence of Winter's arrival here in Southern West Virginia. I can't speak for the whole of Appalachia because I haven't watched the weather channel in a few days ;)

Normally a lack of evidence that Winter has arrived would make me happy -- ecstatic even --  but this year, not so much. This troubles me. Greatly. It's not normal. Not even close. Not for me any way.

Any way, back to the lack of Winter weather ...


It turns to mud!
Yes, folks (ding! ding! ding!) we have a winner!
Mud. Mud everywhere. As far as the eye can see.  Yuck. No bueno. I was going to post pictures to prove my point but I decided against it. Why would you want to see that? Well, you wouldn't want to so I stopped myself just short of my obsessive compulsion to show you just how ugly mud can be. ﻿Plus, I would've had to go out in the mud to take pics of the mud and ain't nobody got time for that.
Listen, I'm not a fan of the cold. Bone-chilling temps, icy roads and precipitation in the form of freezing rain are things we all could do without.  All I'm really asking for is a happy medium. Surely there is one.
Listen, I NEVER thought I'd hear myself say this but all this brown on the ground is bringing me down ... I'm beginning to think a white Christmas wouldn't be such a bad thing. At least the white stuff would cover up the brown stuff, right?
After all, it would make the kiddos happy, my neighbor Sara would be thrilled and, oh heck, who am I kidding? I know lots of folks that would be over the moon if we had some snow on Christmas Eve & Christmas Day ...
Now, before you go and get all weirded out by what I just said 'cause you know me and you're convinced that Kimberly has really lost her mind 'cause this is completely out of character (and you would be right) just know that I'm not advocating snow drifts up to my behind for weeks on end ... far from it!
You can't blame a gal 'cause she'd like to wash the back door rugs and have them look clean for more than a second or because she longs to walk to her car without throwing her back out 'cause she nearly falls on her behind, slipping on wet, brown ground. I declare it's trickier to navigate on foot than the white stuff!
On the other hand, maybe there is something wrong with me. I started to notice it with the first snow fall in early November. During my 17-mile trek to work, I actually looked at the snow covered mountain and thought it was pretty & voiced it. While walking into WalMart one warm evening after work, I had a thought "It's so warm, it just doesn't feel like Christmas" ... what's up with that? I'm just not feeling like myself these days.
For the record, whenever I don't feel like myself, I usually always blame my hormones (or lack thereof) but this time, I'm blaming it on the mud ....
I'm ready for some (barely) below freezing temps to solidify the ground and if that brings on a (reasonable amount of) snow then so be it.
Please excuse me while I look for the thermometer. I think I may be running a temp.

"I believe in Christianity as I believe that the sun has risen: not only because I see it, but because by it, I see everything else" ~~ C.S. Lewis


"America is great because America is good. Her pulpits proudly proclaim the Word of God and Americans listen to the Word and act on the Word. They embody the Word ... If America ever ceases to be good in character, America will cease to be great" ~~ Alexis d'Tocqueville